Since lasting change doesn’t happen overnight, NACTO’s work in our Accelerator cities is well underway. This summer, we joined city staff in Denver, Atlanta, and Minneapolis to tour project areas, review design concepts, and develop a thorough understanding of each city’s opportunities and constraints with lower-carbon transportation projects. By meeting with project teams in person, these site visits were also a meaningful opportunity to brainstorm ideas together, strengthening the relationships that will serve as the backbone for each Accelerator.

The Mile High City is speedily building out its (mile) high-comfort bike network. Denver wants every city household to be within 1/4 mile of an all ages and abilities bike facility by 2030. In the next five years, the City is making a huge dent in this goal: they plan to build 125 miles of bikeways across 10 different neighborhoods, bringing the number of households within this range to 75%. When fully built out, these local area networks will increase access to bike facilities in historically underserved areas, fill gaps in the city’s existing network, and connect large swaths of the city to high-comfort bikeways that will make biking more appealing and accessible to more people citywide.

This July, NACTO joined project teams to brainstorm design concepts for corridors in 3 of the city’s 10 planned local bike networks. Over two days, we led Denver’s project teams through design charrettes to identify concepts that will unite the neighborhood bikeways and ensure they are inviting to all ages and abilities. Over the next few months, Denver staff and their design team will iron out designs for the three initial community networks, with NACTO providing treatment and implementation suggestions along the way. 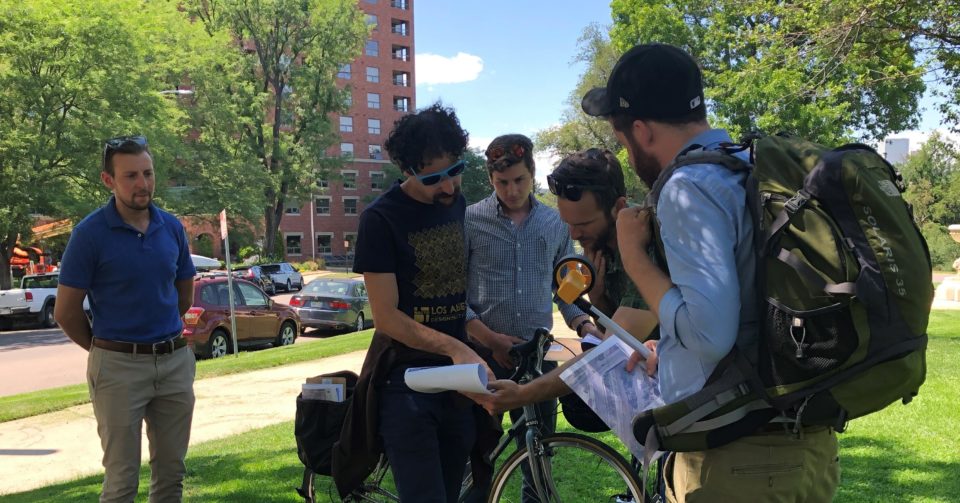 Denver plans for every city household to be within a 5-minute (1/4 mile) ride of high-comfort bike infrastructure by 2030. With approval of the Elevate Denver Bond, they’ll install 125 miles of these bikeways over the next five years, increasing the percentage of households within 1/4 mile from 38 to 75.

Design exercises transferred ideas identified during site visits to paper, applying lessons from the field and techniques and treatments from NACTO’s design guidance, to develop a set of standards for Denver to design 3 of its 10 planned local area bikeway networks.

With a bold vision for its streets, Atlanta is using its climate commitments as a chance to make progress on creating an equitable transportation system. The city is doubling down on safety and climate by improving mobility: filling in sidewalk gaps, building safer places to walk, and rapidly expanding its bike network; efforts that will ultimately be led by the city’s first-ever Department of Transportation, formed earlier this summer. Through the Climate Challenge, Atlanta plans to build 15 miles of high-quality bike lanes, expanding multimodal (and, by extension, low-carbon) travel opportunities in the city.

In August, NACTO joined city planners and engineers to workshop these bikeways, which Atlanta will implement using quick-build techniques. These lower-cost installations will quickly double the extent of Atlanta’s all ages and abilities bike network, improve safety for people biking and walking at a lower cost than capital construction, and improve the city’s ability to implement similar projects, increasing capacity for future bikeway expansion. Atlanta and NACTO staff toured streets with existing and planned bike facilities, then applied field observations to a series of visioning exercises to help staff reach agreement about design concepts to apply across the network. As the hard work of neighborhood engagement, design, and implementation begin, NACTO is thrilled to provide technical and implementation support as the city expands its network of high-quality bikeways, and with it, access and opportunity in Atlanta.

City of Atlanta staff joined NACTO on a tour of bikeways in downtown Atlanta, including some routes that the City will build out through the Climate Challenge. Riding on roadways with existing and planned bike infrastructure gave City staff the opportunity to see what’s working, what isn’t, as well as opportunities and challenges for upcoming expansion. 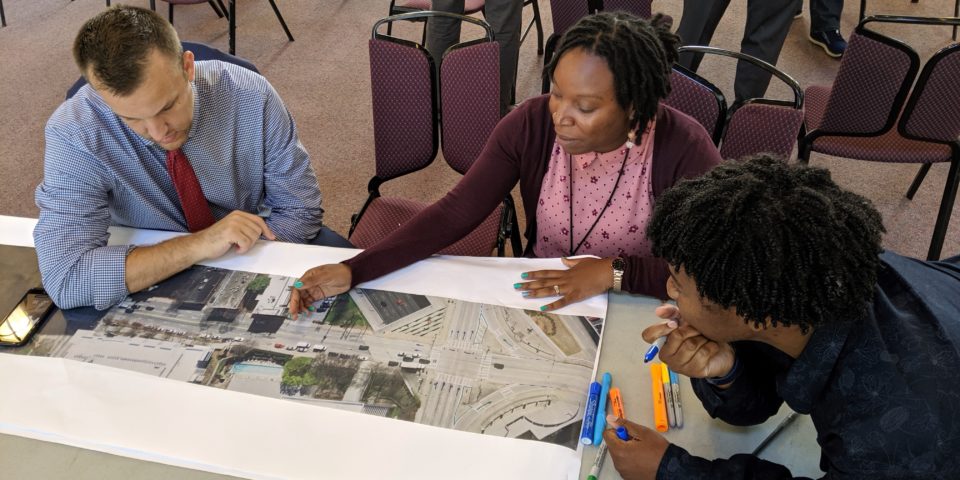 Betty Smoot-Madison of Atlanta DPW leads colleagues in a design exercise at the NACTO workshop in August. Sketch sessions like this allow practitioners to talk through ideas together, build consensus for designs, and work out details for sites that can be used around the city.

Minneapolis is putting its weight behind transit. By 2025, the City wants to double regional transit ridership and reduce citywide greenhouse gas emissions by 30%. That work is already happening. Prior to the Climate Challenge, Minneapolis piloted bus-only lanes along congested corridors to reduce transit delay and act as proof-of-concept for future transit priority projects. So far, they’re proving their worth. Following a 3-day pilot on Hennepin Avenue in 2018, Minneapolis has installed permanent lanes on Chicago and Hennepin Avenue, with another pilot scheduled for Nicollet Avenue later this year. As part of the Climate Challenge, Minneapolis will roll out their next round of bus-only lanes, with support from NACTO on design and project evaluation for continued rapid implementation.

Over two days, NACTO joined Minneapolis and MetroTransit staff to discuss their goals and cross-pollinate ideas and design solutions across agencies. This gave people an opportunity to collaborate outside the office and get creative in identifying design solutions. Building off Minneapolis’ prior success with bus-only lanes, we joined staff to walk project corridors, review transit priority case studies in other cities–including Climate Challenge cities Austin, Boston, Denver, and Seattle–and apply takeaways to design exercises for the Nicollet Ave Corridor. Meetings like this are an exciting part of what the Climate Challenge offers: NACTO convened staff from across departments and agencies, creating new opportunities for idea-sharing between colleagues. Throughout Minneapolis, staff are interested in using their streets as a laboratory, testing design and operational ideas to see what works best for efficiency, safety, and the environment. By reviewing what’s happening on their streets and elsewhere across the U.S., Minneapolis is poised to keep expanding transit lanes and, with them, reliable and low-carbon transportation options for the people they serve.

The City will pilot its next bus lane on Nicollet Ave, a constrained multimodal corridor in South Minneapolis. During this summer’s site visit, NACTO joined staff from across departments and agencies for a tour to observe and discuss what is working (and what opportunities they have for improvement) when designing future bus lanes.

Many of Minneapolis’ current and planned bus priority corridors serve multiple modes of transportation, including people walking, biking, scooting and driving. Ensuring these streets continue to work for everyone requires a deliberate, yet flexible, approach to street design, including Minneapolis’ approach to use pilots to test and iteratively improve designs.

Through the Climate Challenge, we are helping cities reduce transportation emissions by implementing projects that shift trips away from motor vehicles. At the same time, we are helping rethink how transportation can work–both in these cities and in the U.S.–by supporting projects that give people more options to get around while also supporting efforts to build internal structures so cities can continue implementing more multimodal, low-carbon transportation systems, even after the Climate Challenge ends.

And there’s no time to waste; Climate action needs to happen immediately and these Accelerator cities are showing us how it’s done. These site visits are kick-starting NACTO’s support to each city’s project team, laying the foundation so each Accelerator city is queued up to collect baseline data needed to measure progress and success, complete design drawings, and identify the pathways they’ll use to deliver on their ambitious goals. With multi-day site visits under wraps in three cities, we’re off to Boston and Philadelphia. Stay tuned!