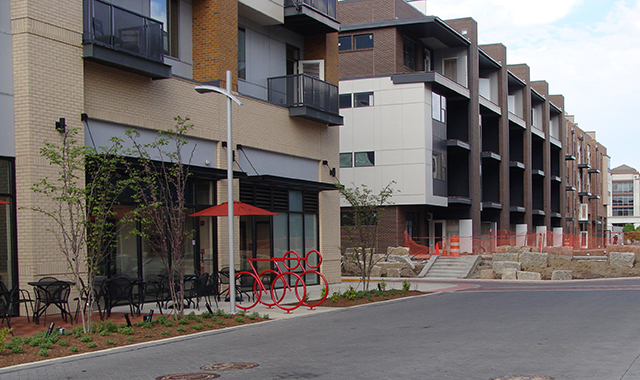 Development in and around the trail is evident, as new hotels, businesses, and residences have sprouted in its wake. 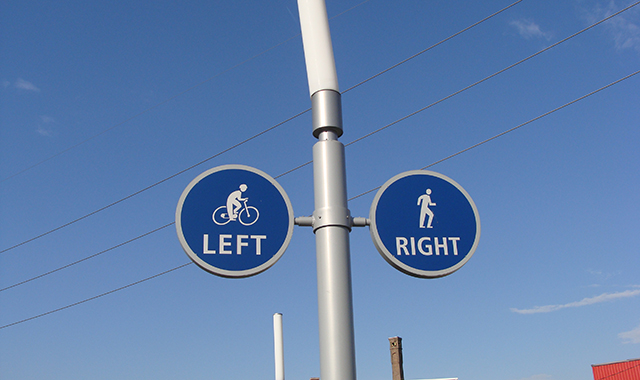 Signage demarcates space on the Trail. 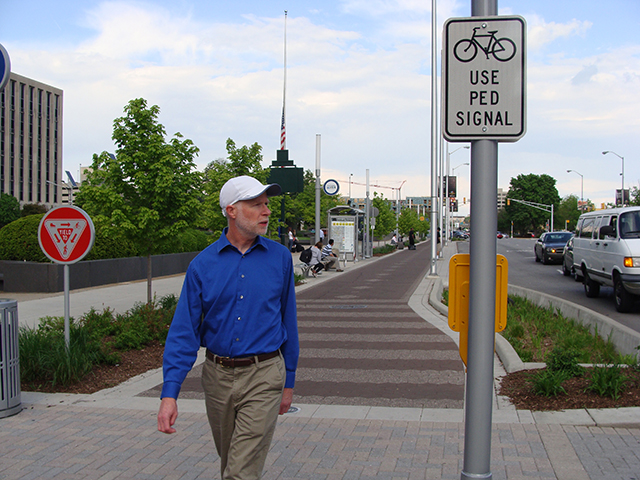 Rob Burchfield surveys one of an intersection crossings on the Trail. 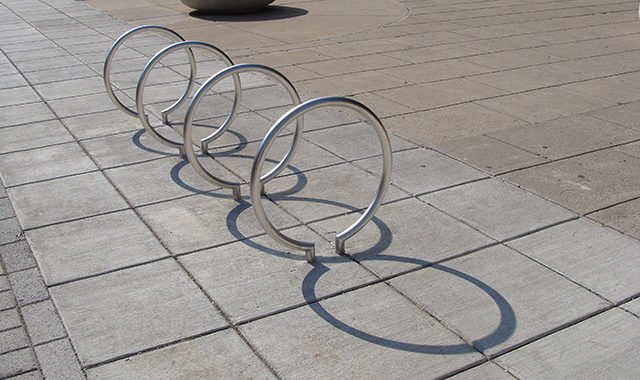 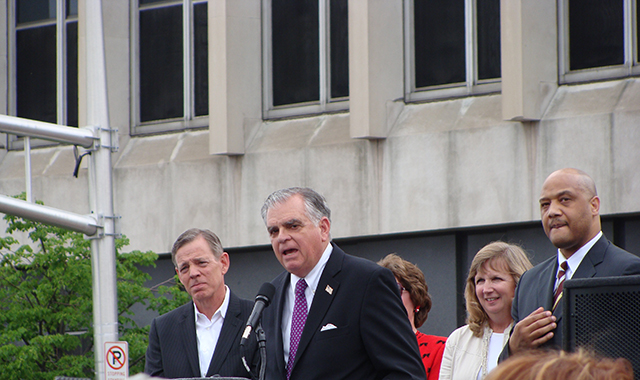 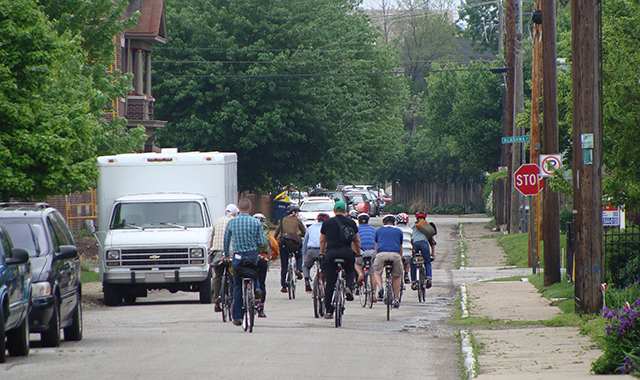 The team rides down a route planned for a future Bicycle Boulevard. 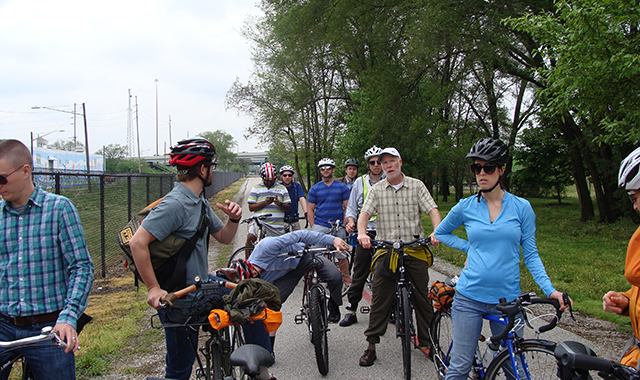 On May 10, project managers and NACTO guests took a ride on the Monon Trail to visit potential key connections to the greenway. 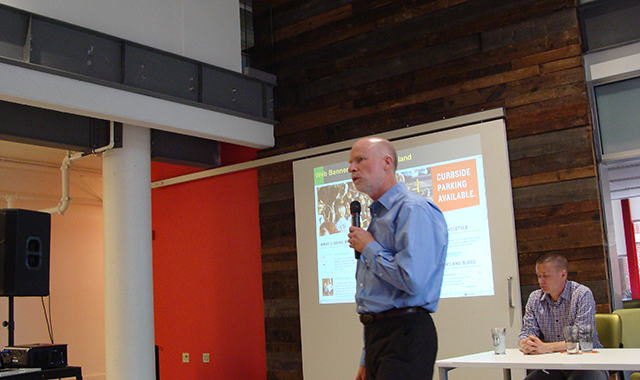 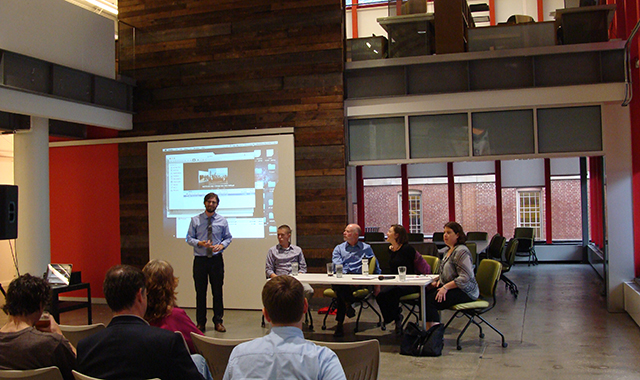 Active Health by Design, an Indianapolis non-profit, hosts a panel discussion on the evening of May 9. 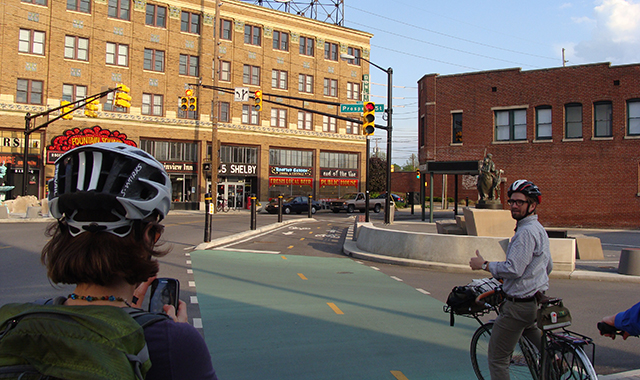 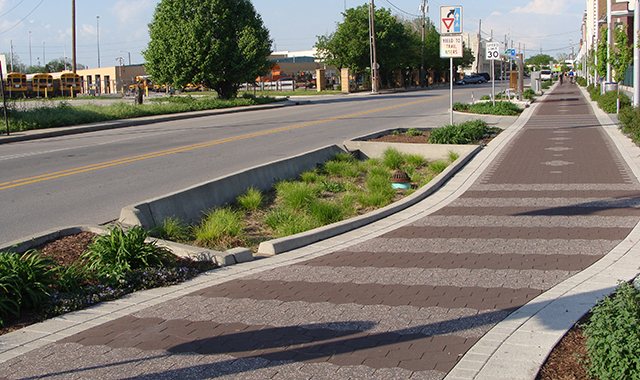 The Indianapolis Cultural Trail runs eight miles through the heart of downtown and connects to major cultural districts through the city.

On May 10, 2013, city leaders, transportation officials, and local partners, joined by USDOT Secretary Ray LaHood, celebrated the final ribbon cutting of the Indianapolis Cultural Trail, an eight-mile cycle track and multi-use path connecting the downtown with the city’s cultural districts. The Trail, which has been under construction for six years and in planning for just over a decade, has breathed new life into the fabric of downtown and created seamless connections between neighborhoods once severed. In its wake, the Trail leaves the tangible products of its investment, sprouting new businesses, residences, and mixed-use developments, along with thriving bars and coffee houses. Most impressively, it now composes one of the most cohesive, protected, and advanced downtown cycling networks of any city in the United States.

As part of its Cities for Cycling Road Show series, which brings practitioners from leading American cycling cities to share lessons learned with emerging cities, NACTO came to Indianapolis on May 9-10 to help the city achieve even greater ambitions. At a pivotal moment for the city’s bike program, NACTO convened three of the nation’s leading experts in the field: Nicole Freedman, Director of Bicycle Programs for the City of Boston, Robert Burchfield, City Traffic Engineer for the City of Portland (OR), and Mike Amsden, Bike Program Manager for the City of Chicago with T.Y. Lin International.

The group, accompanied by Indianapolis Bicycle-Pedestrian Coordinator Jamison Hutchins, Public Works Director Lori Miser, and Chief Engineer Andy Lutz, convened with Mayor Greg Ballard, top city officials, and engineering staff for two days of intense discussion on Indianapolis’ next steps. Topics spanned from bike sharing to data collection to intersection design, spotlighting how to manage an innovative new program while working cooperatively with agency partners, politicians, and communities. On May 10, Hutchins led the group on a comprehensive tour of the city’s existing and planned bicycle network, giving project managers in the process of designing the city’s next round of facilities access to peers managing similar challenges on their own streets.

Indianapolis Mayor Greg Ballard expressed his thoughts on how the city can continue to build on its success. “The Cultural Trail and the city’s extensive greenway network give Indianapolis a framework for building a truly connected city and region. Moving forward, we will continue to expand this network to improve connectivity and serve the diverse transit needs of current and future Indianapolis residents. The Road Show was a pivotal moment for us to learn from other cities working toward common goals and to show other cities the incredible progress we have made thus far.”

Lori Miser, Director of Public Works for the city of Indianapolis, added, “We convened our entire engineering team and key staff from our Operations Division—not just bike project managers—for NACTO’s training on bikeway design. We are working to create an internal culture that supports active involvement throughout our department. This type of coordination keeps us focused on the big-picture transportation goals for the City and helps us identify the most efficient and sustainable ways to embark on these projects.”

Andy Lutz, Chief Traffic Engineer for the City of Indianapolis, said, “On the second day of the Road Show, the group traveled to a trail junction at a historic bridge that has been a major barrier in our active transportation network. Within fifteen minutes, the group devised three potential alternatives. I feel comfortable moving forward knowing that we’ve had input from leading practitioners from cities around the country.”

Karen Haley, Executive Director of the Indianapolis Cultural Trail, added, “the Cultural Trail has boosted property values, reinvigorated businesses, and created a man-made oasis right through the heart of downtown. Our challenge going forward is not only how to maintain the trail, but how to activate it. Learning from Boston, I think that Bike Share could be a game-changer for this city and expand the use of the trail. We can’t wait!”

Nicole Freedman, Director of Bicycle Programs for the city of Boston, said, “Indianapolis demonstrates just how high the stakes are for talent attraction and retention in our cities. In Indianapolis, I see a city whose commitment to quality of life is going to pay off and attract young families. Boston isn’t just competing with San Francisco and Seattle any more. We are competing with cities all across the country. People want this. Cities need to build it, or they’ll lose out.”

Robert Burchfield, Portland’s City Traffic Engineer, added: “Portland had a head-start compared to most other cities in the U.S. developing bikeway networks, but we know that other cities are now making rapid progress toward making their cities bicycle friendly.  Indianapolis is a prime example. When I saw the Cultural Trail, I was impressed and a bit envious.  The Trail design and construction is very high quality.  It may be the closest example I have see to a European style cycle track in the U.S. thus far.”

Mike Amsden, Bike Program Manager for the City of Chicago, said, “Chicago and Indianapolis both have tremendous political support to transform our streets and make them safer for everyone getting around. It was useful to me, as a practitioner, to see a city facing similar challenges and opportunities and to strategize together about how we move ahead.”

NACTO would like to thank its partner sponsor, Transpo Industries, and its contributing sponsors, Crawford, Murphy & Tilly and American StructurePoint for supporting Cities for Cycling.

For more information on the Indianapolis Cultural Trail, visit indyculturaltrail.org