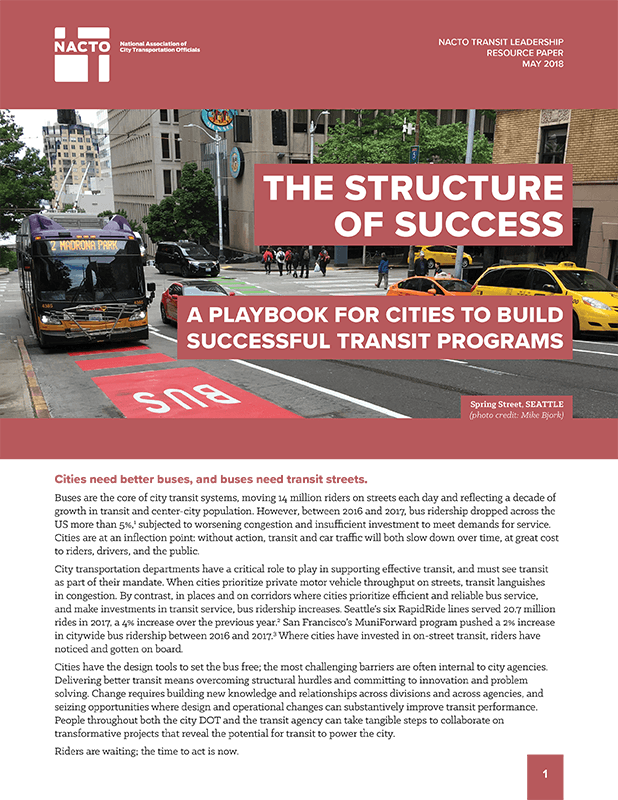 Bus networks in cities across North America are at an inflection point: while moving 14 million riders on streets each day, ridership is falling in many major cities, subjected to worsening congestion and insufficient investment to meet demands for service. Without action, transit will continue to slow down over time at great cost to customers, to operators, and to cities.

The Structure of Success—the latest NACTO Transit Leadership Paper—details how city transportation departments and their transit agency partners can overcome structural hurdles and commit to supporting effective transit. Developed for city DOTs and transit operators, the paper builds on success stories from cities that are thinking innovatively about how they work together to build effective transit street programs. From building staff capacity to deliver projects, to fully rethinking the organizational chart, this resource lays out actionable steps and strategies for institutionalizing collaboration and embedding transit performance into a department’s mandate.

Cities control the streets that buses rely on. By working hand-in-hand with transit providers, cities have the tools to unlock mobility for all.

The Structure of Success is part of NACTO’s Transit Leadership series. Developed with funding support from TransitCenter, the Transit Leadership resource papers convene key issues at the nexus between city streets and on-street transit, and provide guidance for cities, transit operators, and their partners to transform their streets and cities to support better transit for all.

Read the rest of the Transit Leadership series: