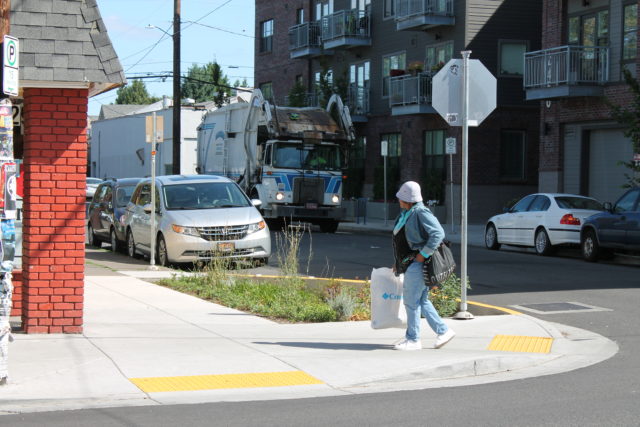 Accessibility, connectivity, and vibrancy are requirements for a well-functioning urban environment. GSI projects can contribute to the creation of a cohesive and legible streetscape and safe, beautiful public spaces.

Conduct intercept surveys of people walking, bicycling, and sitting in public spaces to gather qualitative data about their perceptions and experiences of safety, happiness, stress, and well-being. Use metrics like the gender ratio of bicyclists or the ratio of children and seniors to young adults to evaluate comfort for all ages and abilities.

Cities are thirsting for public space. Measure acreage or square feet of space reclaimed from car-only street space. Even hardscape, if relevant for public life and activity, is valuable square footage.

Measure public life before and after project implementation and use before/after photography to document changes. To evaluate projects systemactically, compare project data with comparison corridors for a control case. Before/after data and photographs, as well as comparative studies, are critical tools for project evaluation and case-making for future projects.

Measure human activity in public spaces through public life canvassing. Count people using the street for stationary activities in a series of walk-through “snapshots” of a space.

Though GSI projects can improve adjacent property values, it can be difficult to collect adequate sample of data to be more than anecdotal. Include community members and residents throughout the design process to ensure GSI projects meet community needs and are not perceived as a tool for displacement, especially among renters who may not accrue the benefits of increased property values.

Use metrics like retail and residential occupancy/vacancy rates and sales tax revenue for local businesses along the project corridor. Conduct intercept surveys of customers visiting businesses to demonstrate approximate value of purchases made or the number of potential customers visiting the store.

GSI projects, especially those with shade trees, can reduce building energy demand. Measure energy consumption before and after project implementation, and continue to measure over time as trees mature and provide more shade.

Temperature data is not a direct indicator of GSI performance, but can provide clues to inform future GSI system designs to better reduce local temperatures through evapotranspiration and shading.

Measuring reductions in the urban heat island effect requires a combination of techniques, including measuring the energy reflected and emitted from various surfaces in cities, as well as air temperature measurements.

Greening in urban environments has been attributed to improving mental, physical, and social well-being.

Water quality improvement is usually the most significant and directly observable public health benefit from green infrastructure programs. Measuring reductions in combined sewer outfall events, as well as the presence of pollutants, harmful bacteria, and metals in regional surface and groundwater are basic components for monitoring and communicating program efficacy.

Cities can work with institutions or public health researchers to understand the diverse human impacts of greened streets. Monitoring changes to asthma rates and heat-related illnesses among nearby residents may indicate changes to the physical health impacts of streets.
Additionally, as streets become more inviting to active use, health indicators such as obesity and cardiovascular disease can verify the benefits of more active urban environments.

Finally, mental health can be improved by urban green space; proximity and access to urban green spaces reduce stress and anxiety. Survey street users to understand how they perceive greened versus unimproved streets, documenting how they react to or perceive stressful events, with or without green spaces.

An equitable green infrastructure program distributes green space among neighborhoods with a conscious recognition of the need to avoid harm to vulnerable people, as low-income neighborhoods have historically borne a greater risk for exposure to pollution and toxins. Any negative impacts, such as flooding, must not be disproportionately borne by one community.

Analyze the spatial distribution of GSI facilities and tree canopy and assess whether resources are being invested equitably. Use flooding models to supplement information from the public (such as 311 calls or constituent complaints) to inform and select project locations, and ensure that projects are being implemented across neighborhoods regardless of socio-economic factors.