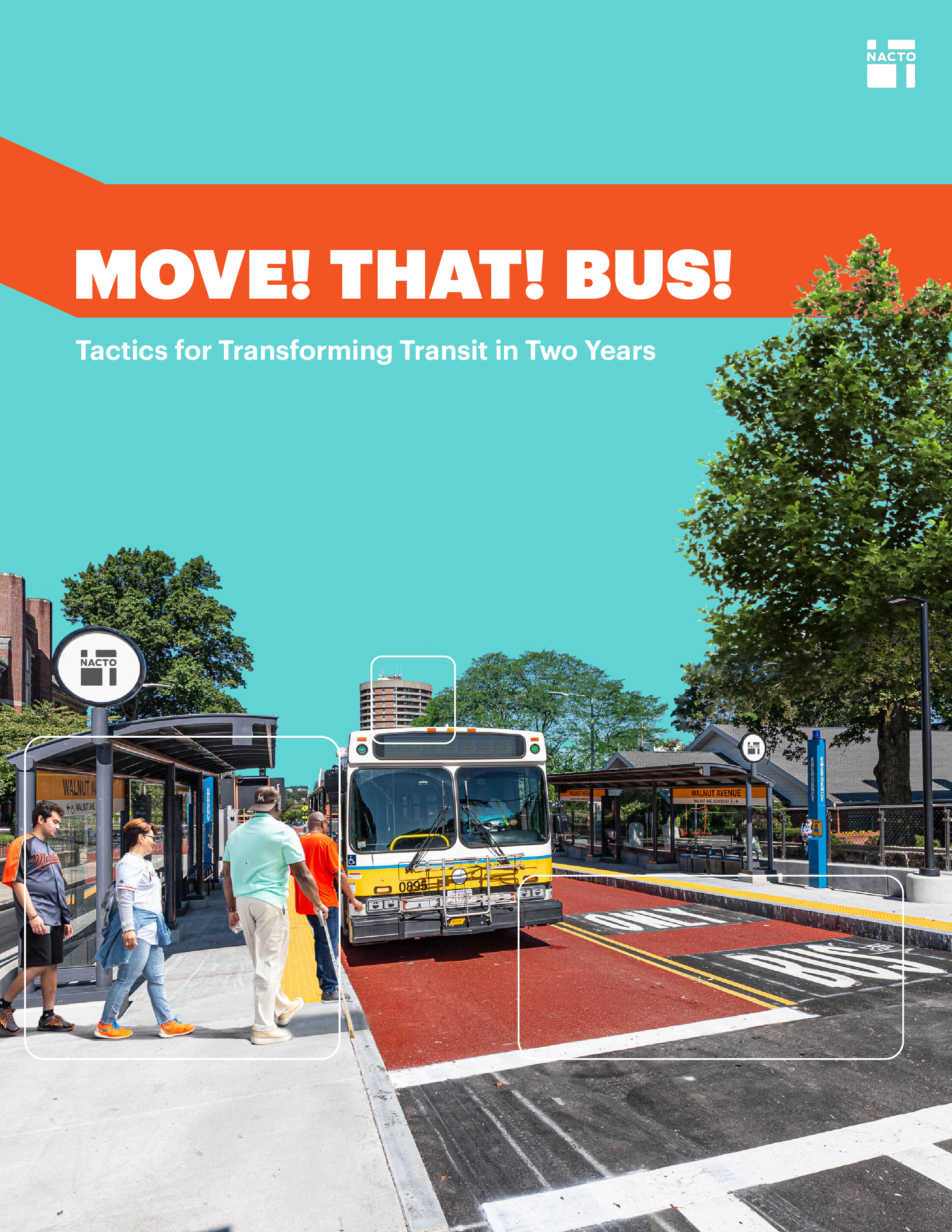 How to Transform Transit and Fight Climate Change in Two Years.

The most powerful tool leaders have to address catastrophic climate change is the humble city bus. Flexible, simple, and efficient, a single bus can carry up to eight times more people than a personal car, reducing emissions by up to 82% per trip. More than half of all trips in the U.S. are less than five miles. With the right improvements, these short trips can be taken by bus at a fraction of the price, with efficient and reliable service that’s competitive to driving.

In the U.S., the transportation sector is responsible for the greatest share of greenhouse gas emissions–at 28% of total emissions. Research from the UN’s Intergovernmental Panel on Climate Change makes clear: public officials have less than three years to avert the worst effects of climate change.

Move! That! Bus! Tactics for Transforming Transit in Two Years provides decision-makers—elected officials, transit board members, department and agency executives—an action plan for improving bus service and reducing transportation-related emissions in the short time we have left to avert the worst impacts of climate change.

The power of the bus as a tool for fighting carbon emissions comes from three places. First, improvements to bus service can be implemented quickly. The actions outlined in this paper can be realized in less than two years, and often in a matter of months. Second, results are equally rapid. Leaders who commit to improving bus service can expect to see an immediate increase in bus ridership, as well as related safety, equity, and reliability benefits for their constituents. The bus is proven and effective.

Finally, and perhaps most importantly, almost all decisions about bus service are made locally, by local governments and local leaders. Local transportation departments control the design of streets where the bus operates. Transit agencies decide which destinations to serve, how frequently to operate the bus, and what fares to charge. National policy cannot move at the speed needed to avert catastrophic climate change: local leaders must use local policy to reduce emissions and make key changes that improve the lives of their constituents. 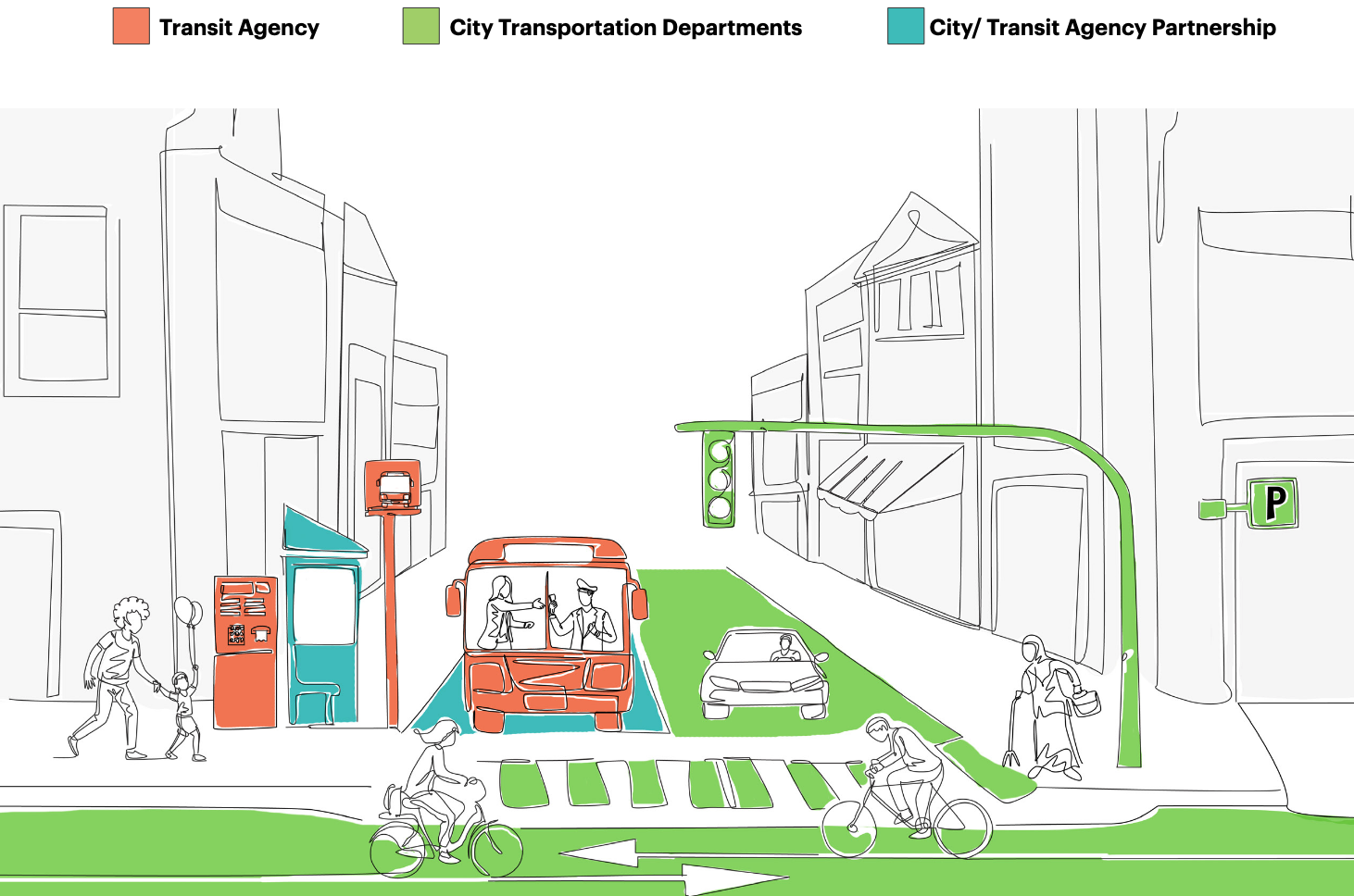 Investing in the city bus is our best chance to ensure a habitable planet. Leaders at all levels must focus the full weight of their authority on these proven bus improvements and policy reforms. There is no time to waste.

To best leverage the potential of the bus, leaders and decision-makers should commit to three actions to modernize bus service, increasing the reliability and accessibility of bus service and bringing in new riders:

Trips to work represent only 16% of the trips people take throughout the day, but most transit networks are optimized for peak-hour commuting to downtown areas. For more people to ride transit, cities and transit agencies need to reorient their networks around all the trips people take—not just downtown commute trips—and offer reliable, all-day, 15-minute or better service on core routes that serve destinations like healthcare centers, manufacturing sites, universities, entertainment venues, and parks. 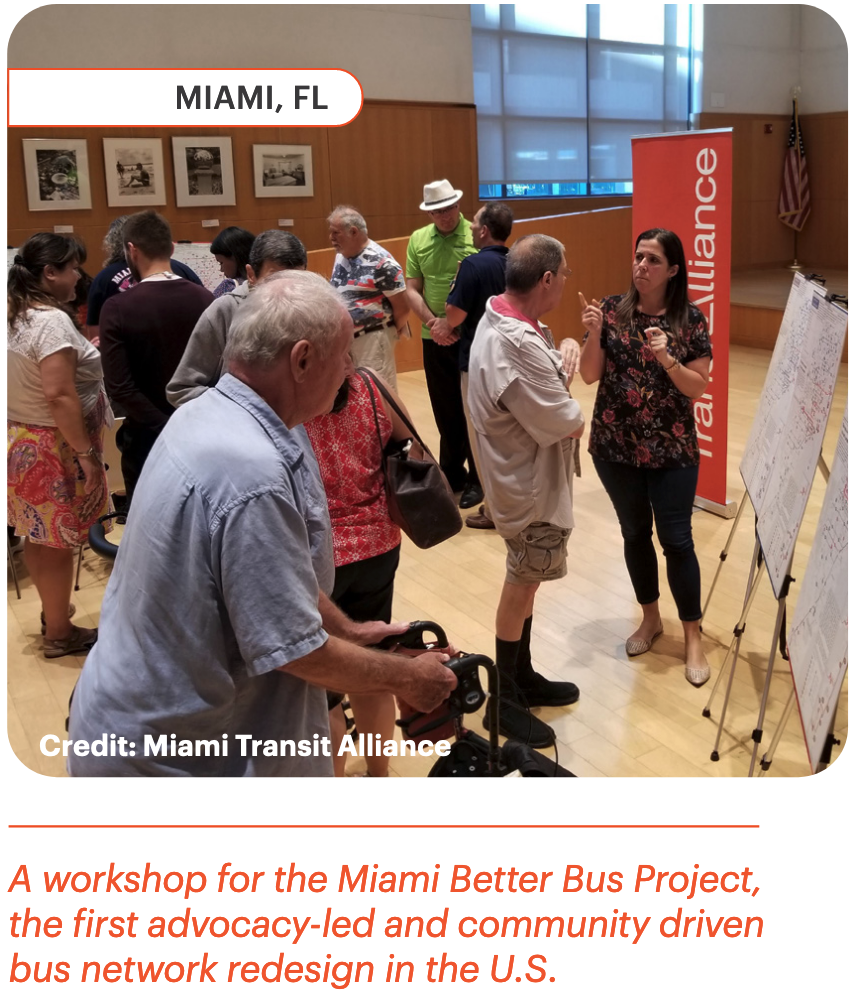 Redesigning city streets to get the bus out of slow traffic is one of the most effective ways to improve transit speed and reliability, and win back riders.

In most mid-to-large U.S. cities, heavy traffic and frequent stops keep buses traveling at around 10 mph or less. By installing bus lanes, retiming signals, fixing pain points at intersections, and rebalancing bus stops, cities across North America have reprioritized their streets to get the bus out of traffic and make bus service more efficient and reliable. For example, the Boston Transportation Department (BTD) and Massachusetts Bay Transportation Authority (MBTA) redesigned a one-mile stretch of Washington Street to improve bus reliability and save 19,000 riders over an hour each week.

Transit works best where people and destinations are clustered together.

As a result, improvements in service planning and street design must be coupled with changes to local curbside, parking, and land use policies to fully unlock the potential of the bus and reduce emissions and inequities.

Most land use, parking, and curbside policies are fully under local control—the purview of mayors and city managers, their administrations, city councilors/supervisors/alders—and directly influenced by residents and advocates who live there. While land use reforms can take many years to translate into large-scale changes to the built environment, cities can study, pass, and implement zoning reforms within a two-year timeframe.

Decision-makers should focus on the following three policy areas to yield the best transit- and climate-friendly results in the near future: