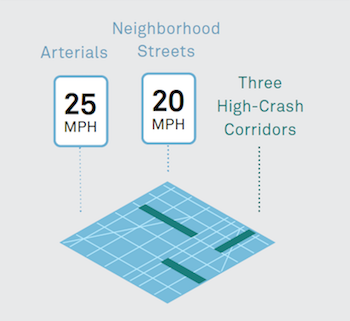 To build their case for lower speed limits, Seattle DOT (SDOT) staff compiled two documents. The first was a detailed history of the city’s 1934 decision to reduce speed limits to 25 mph on arterials and 20 mph on residential streets, and their 1948 decision to raise the default maximum speed across the city from 25 to 30 mph. The second was a data-based justification for lower speed limits in 2016. In this document, SDOT made the case that the built environment, the city’s Vision Zero commitment, and recent mode shift away from driving and toward walking, biking, and taking transit all signaled a need for lower, safer speed limits. SDOT also included speed and safety data from all of their recent Vision Zero pilot projects.

In November 2016, the new law went into effect. This campaign was a success in large part because of the data that SDOT used to support their request. SDOT also included a variety of stakeholders during the process—the transportation director, a city council member, a lawyer from the law department, the city traffic engineer, and a public engagement specialist.