In 2018, Portland City Council approved an ordinance that lowered the speed limit on all residential streets to 20 mph, a change that resulted in reductions on 70 percent of the city’s street network. 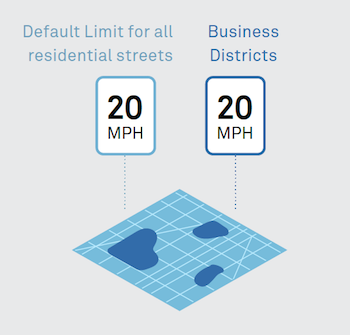 Oregon state law also allows the city to implement a 20 mph speed limit in business districts and to lower speed limits on specific non-residential streets pending approval from Oregon DOT in each case.

In Portland, there are 228 miles of nonresidential arterials with speed limits between 35 and 45 mph where most road deaths occur. Effective May 1, 2020, the Oregon DOT began using a revised speed setting methodology for streets like these in urban areas that weighs 50th instead of 85th percentile speeds, and that better accounts for the presence of exposed road users, street design, and land use characteristics. This important change came after years of coordination between City of Portland staff and Oregon DOT staff to develop a revised methodology for determining speed limits on non-residential streets.

After a speed limit change is approved, but before installing new signs, City of Portland staff notify neighborhood residents about the speed limit changes, along with officials at the local transit agency, which notifies their operators.

Where possible, City of Portland staff work to coordinate speed limit reductions with street redesigns, such as road reorganizations. However, Portland frequently reduces speed limits on streets without any expected near-term changes in street design or enforcement.