New York City has worked for over a decade on comprehensively reducing speeds on streets across its five boroughs. In 2011, the City installed its first Neighborhood Slow Zone: a program that revamps small (about . square mile) residential areas with low traffic volumes and minimal through traffic, with 20 mph on-street markings, signs, speed humps, and other traffic calming treatments. This program quickly expanded to over two dozen neighborhoods, increasingly demonstrating the large demand for safer streets across the city. 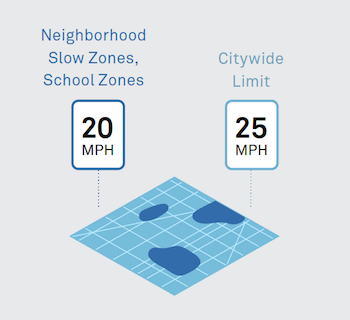 In 2013, family members of people killed in traffic crashes in New York joined with City Council members and local agencies to petition the State Legislature to reduce speed limits. At the time, the citywide speed limit was 30 mph, the lowest allowed by state law. The campaign hit political hurdles and the State took no action.

The next year, New York City rolled out its Vision Zero Action Plan, which called for City Hall to lead a campaign to reduce the citywide speed limit to 25 mph.

With the combined advocacy of a years-long campaign by local safe streets advocates, as well as sustained pressure from the Mayor’s Office and city agencies, the state legislature passed a new bill in June 2014 authorizing New York City to lower its citywide speed limit. The City promptly took action, and a new citywide speed limit of 25 mph went into effect in November of the same year.

In the same legislative session, the State Legislature also granted New York City permission to establish an automated speed enforcement program with a limited number of cameras located in school zones. The program was successful, with speeds lowered by an average of over 60 percent in camera locations. In 2019, the City obtained new authority to expand this program more than five-fold, from 140 to 750 active zones.