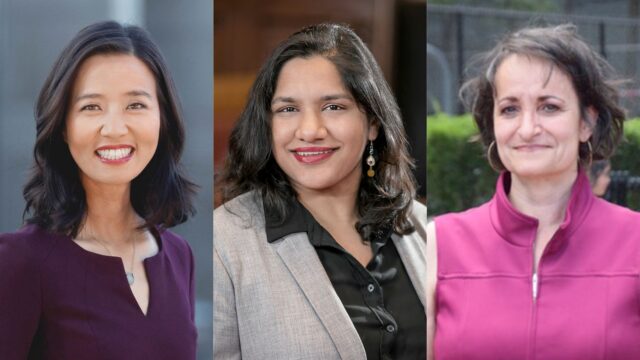 The leaders of the three cities–which are jointly hosting the conference from September 7th-10th–share their vision for the future of transit and streets in the region.

Mayor Michelle Wu of Boston, Mayor Sumbul Siddiqui of Cambridge, and Mayor Katjana Ballantyne of Somerville announced today that they will attend and give keynote speeches at the 2022 Designing Cities Conference on Wednesday, Sept 7, 2022, hosted by the National Association of City Transportation Officials (NACTO).

The leaders of the three cities–which are jointly hosting the conference from September 7th – 10th and are all NACTO members–will discuss recent bold and creative transportation interventions, as well as their advocacy for investing in state-of-repair work to increase the safety and resiliency of the region’s infrastructure. Recent major accomplishments of the Boston region include a major overhaul of the region’s bus network, a pilot program for fare-free buses, an extension of the MBTA Green Line and a “Cycling Safety Ordinance” in Cambridge that has jump-started construction of the city’s nationally-recognized protected bike lane network.

“The fight for safe, accessible, and affordable transportation requires partnership across our region, and I’m proud to join Mayors Siddiqui and Ballantyne to welcome NACTO and its members to our cities,” said Boston Mayor Michelle Wu. “In Boston, we’re rolling out dedicated bus lanes, safe cycling infrastructure, and fare-free transit to help make our City a leader in economic, racial and climate justice. At this year’s conference I’m looking forward to sharing our regional progress and learning from best practices across North America.”

“Tens of thousands of Cambridge residents rely on our transportation system to travel to work, school, the doctor’s office and just about everywhere else,” said Cambridge Mayor Sumbul Siddiqui. “I’ve worked to get our buses moving faster and to make biking safe and easier, so that Cambridge works for everyone–including people like my dad, who does not drive and has taken the bus and train for over 30 years. I look forward to welcoming NACTO and our colleagues from across North America to see the work we’ve done, hear ideas for improvement, and to tackle the challenges ahead.”

“I was a transit and affordable housing activist long before I became an elected official,” said Somerville Mayor Katjana Ballantyne. “Now, I’m proud that my administration is making bold investments in pedestrian safety, bus infrastructure and protected bike lanes, and we are helping the MBTA push the Green Line Extension across the finish line. We look forward to celebrating our partnership with Boston, Cambridge and NACTO at the conference this September.”

“The conference is an opportunity to both honor the hard work of transportation leaders during these difficult past few years and to roll up our sleeves together for the work ahead,” said Corinne Kisner, Executive Director of NACTO. “We’re so excited to have these three groundbreaking mayors with us as we celebrate the innovation and change they—and all of our member cities—have created on our streets.”

“By reimagining cities with agile, quick action and strong leadership, Mayors have the unique power to build stronger, more equitable and resilient communities that can lead the fight against climate change,” said Janette Sadik-Khan, NACTO Chair. “Mayors Wu, Siddiqui, and Ballantyne know that with urgency and drive—and by taking a new approach to their streets and public spaces—they can improve the lives of residents while tackling the crises of our time.”

In addition to keynote speakers and breakout sessions, the Designing Cities conference will feature dozens of “Walkshops,” in which city agencies and local partners offer in-depth tours that highlight the impacts transportation can make, from targeted corridor treatments to neighborhood redevelopment projects catalyzed by transit expansion.

Designing Cities 2022 will take place at the Hynes Convention Center, as well as across the cities of Boston, Cambridge, and Somerville. To learn more about this year’s convening, visit NACTO.org/conference.

###
About the NACTO Designing Cities Conference
NACTO’s Designing Cities Conference, now in its tenth year, brings together nearly 1,000 officials, planners, and practitioners from across North America to advance the state of transportation in cities. Key to its success is a focus on real projects in cities, presented by the practitioners that are making America’s local streets safer, more sustainable, and more accessible. Past speakers have included Mayor Bloomberg of New York City, Mayor Michael Nutter of Philadelphia, Mayor Steve Adler of Austin, and Transportation Secretary Ray LaHood. Past speakers and participants have also included hundreds of CEOs and directors of transportation departments and agencies from cities across North America and around the world. To learn more, visit NACTO.org/conference.

About the National Association of City Transportation Officials (NACTO)
NACTO is an association of 90 major North American cities and transit agencies formed to exchange transportation ideas, insights, and practices and cooperatively approach national transportation issues. The organization’s mission is to build cities as places for people, with safe, sustainable, accessible, and equitable transportation choices that support a strong economy and vibrant quality of life. To learn more, visit NACTO.org or follow us on Twitter at @NACTO and Instagram at @NACTOcities.

About the Cities of Boston, Cambridge, and Somerville
With a combined population of more than 870,000 people at the heart of a five million person metro region, Boston, Cambridge and Somerville are the economic and academic engines of New England and beyond–and transportation innovators. From building the nation’s first subway in 1897, to reconnecting the city after burying an elevated highway in the 1990s, to witnessing Zipcar’s first ride in 2000, to hosting one of the country’s largest bike share systems and making recent advances in rapid bus improvements, the Boston region has a history of looking for creative solutions to urban challenges.