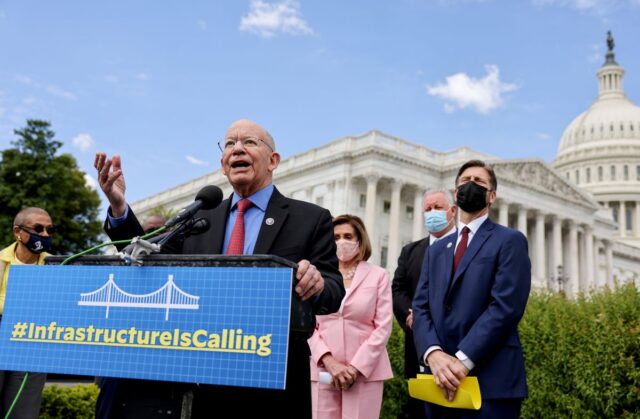 NACTO applauds Chairman DeFazio and all members of the House Transportation and Infrastructure Committee for reintroducing an improved INVEST in America Act. This transformative bill would reorient the federal transportation program around defined goals, helping America make tangible progress against the country’s overlapping safety, equity, and climate crises.

NACTO is encouraged by the Committee’s enduring dedication to long-needed transportation reforms, from prioritizing highway maintenance over expansion, measuring and cutting greenhouse gas emissions, emphasizing transit frequency and ridership, and setting higher standards for safety. The inclusion of detailed provisions to use a safe systems approach in speed limit setting, integrate transit and land use, and allow cities to appeal states’ design decisions make this bill especially powerful. The targeted investments in each of these areas will be crucial to addressing the climate crisis and the country’s continued spike in traffic fatalities while contributing to a lasting economic recovery.

This strong bill could be made even stronger by giving cities more authority around the projects within their boundaries that directly affect cities’ residents. Many of America’s most dangerous streets are within city limits but outside of city control. And dozens of currently-proposed highway projects would funnel unsustainable numbers of cars onto already-choked local streets, growing climate emissions at exactly the moment when we need to reduce them. With greater local input and control over these streets and projects, the INVEST Act can better meet the Biden Administration’s climate, equity, and safety goals, and empower the governments that are most directly responsive to their residents’ needs.

The House’s bill stands in stark contrast to the Senate’s bill, which only proposed creating new small-scale programs without fixing the fundamental reasons why America’s transportation program produces unsustainable, inequitable, and unsafe outcomes. NACTO looks forward to continuing to work with the House Transportation and Infrastructure committee to strengthen this already-strong proposal, and urges the Senate to use this bill as a starting point for setting a new course for mobility in America.

About the National Association of City Transportation Officials (NACTO)
NACTO is an association of 89 major North American cities and transit agencies formed to exchange transportation ideas, insights, and practices and cooperatively approach national transportation issues. The organization’s mission is to build cities as places for people, with safe, sustainable, accessible, and equitable transportation choices that support a strong economy and vibrant quality of life. To learn more, visit nacto.org or follow us on Twitter at @NACTO.