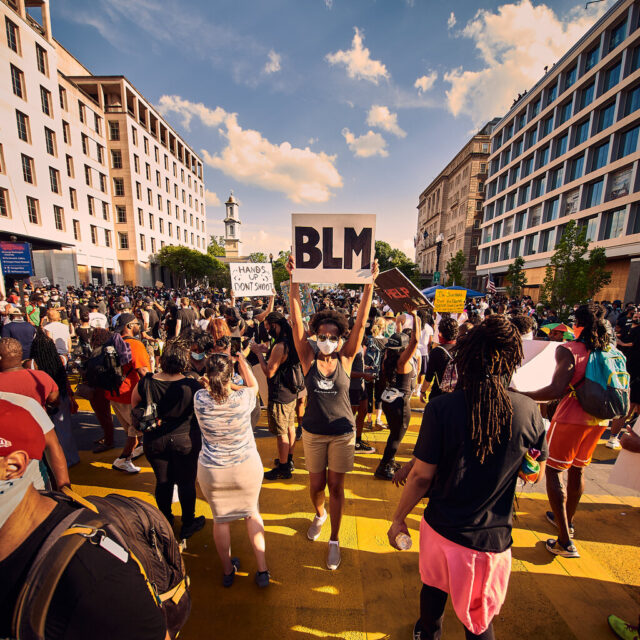 One year ago today, the world watched in horror as George Floyd, a Black man, was brutally killed by a White police officer, sparking months of worldwide protests, and spurring a long-overdue national conversation on pervasive racism in America. Mr. Floyd’s murderer was found guilty, an important measure of accountability, but there is still much more to be done to dismantle racist systems and advance justice.

Transportation agencies are responsible for more than the movement of people. The mission statements of most city transportation departments, transit agencies, and public works departments elevate safety as the primary concern and focus of transportation policy and action. Yet, safety is often narrowly defined, and often, the systems we devise to create safety for some make places unsafe for others, or do little to address the root causes that make access to our transportation networks and public spaces unequal depending on a person’s race and ethnicity.

Today, streets in the U.S. are still not safe for many. Even as we celebrate AAPI heritage this month, attacks against the AAPI community continue at an alarming rate, and many in the AAPI community are actively avoiding streets and transit to keep themselves safe from harm. There is a surge of unprovoked attacks against Jewish Americans and Muslim Americans. And, as we enter June, a month of remembrance and of joyful Pride celebrations, we must recognize that trans people, and especially Black trans women, continue to suffer violence at a shockingly disparate rate on our streets and transportation systems.

Every day, the people in transportation agencies at every level of government use their power, and make decisions that affect the lives of residents. Every decision made–from who is hired to an agency’s relationship with policing, to where resources are concentrated and whose voices are heard at the table–has the potential to uphold current power structures and inequities, or to dismantle racist systems and advance equity and justice.

Today, we reemphasize that everyone in our field has power, through our actions, to affirm that #BlackLivesMatter, and that we have the responsibility to make safer spaces for people of all identities. Today, we recommit to making the decisions that create a future where freedom of mobility rings true for all.