In the past few decades, the streets of Grand Rapids have faced intertwined demands—from new residents moving in to growing demands for multimodal travel to reduced investment in the maintenance and quality of the city’s roadways. In response, the City designed an ambitious initiative: the Vital Streets program, which calls for integrating complete streets and green infrastructure planning to achieve safety, environment, and mobility goals, meeting the city’s present and growing future demands.

When the City approached Atlas Avenue property owners, businesses, and residents about redesigning their street, they identified two primary problems: flooding and cut-through traffic. For years, basements and ground floors along the street flooded during major rain events, causing concerns for residents and property owners. Atlas Avenue is also a neighborhood street in a popular commercial area—houses sit next to a traffic-generating community anchor and fast-moving vehicles use the street as a cut-through.

Before the Atlas Avenue reconstruction, cars cut through the street and buildings flooded during major rain events. After, the new shared street is calmer, slower, and buildings no longer flood.

Once the project started, Grand Rapids representatives and Atlas Avenue neighbors worked together to envision a design that would address both concerns: a slower shared street with stormwater design elements. This vision was realized because of an engagement process to identify local needs and local policy that empowered city staff to address them.

Streets that are improved through the Vital Streets program are repaved or reconstructed. In response to community concerns about flooding on Atlas Avenue, the City elected to reconstruct the road. This gave Grand Rapids the opportunity to look at all the strategies in its toolkit to design a street that could better infiltrate stormwater. A multidisciplinary outreach team refined design scenarios with the neighborhood, and engineers were pushed to think outside the box while using Grand Rapid’s green infrastructure standards as a foundation for their plans.

The result is a full-width reconstruction: Bio-retention features—street trees and curbside planters—and infiltration strategies—new porous pavers—bring stormwater into the city’s system much more effectively than the previous impermeable asphalt. And while the design has curbed and is not a full shared street, as there are curbs, it incorporates design elements that slow traffic, such as curbside bike parking, a chicane, and driveway approaches on both ends. 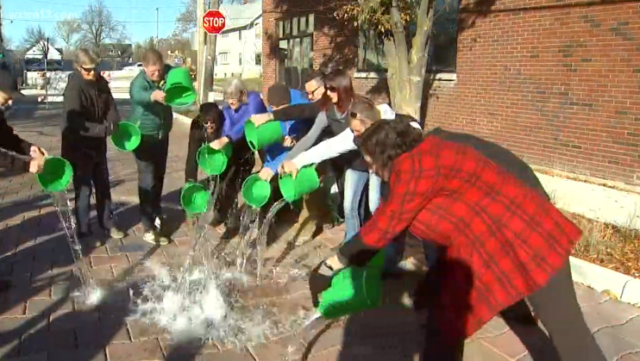 Grand Rapids didn’t celebrate Atlas Avenue with a typical ribbon cutting. They did a bucket pour.

When construction wrapped up and Atlas Avenue was unveiled, the City didn’t do a typical ribbon cutting. It did a bucket pour demonstrating how well the street could handle stormwater runoff. Before the project, Atlas Avenue was one of the worst streets in the city for flooding issues. Nearly two years later, there have been no reports from the neighborhood about any flooding. It’s fair to call the street redesign a success.

Atlas Avenue is a picture-perfect example of the principles in NACTO’s Urban Street Stormwater Guide: Streets are ecosystems, and ripe for reinvention, not just as mobility corridors, but also as public spaces and as part of the natural ecosystem. 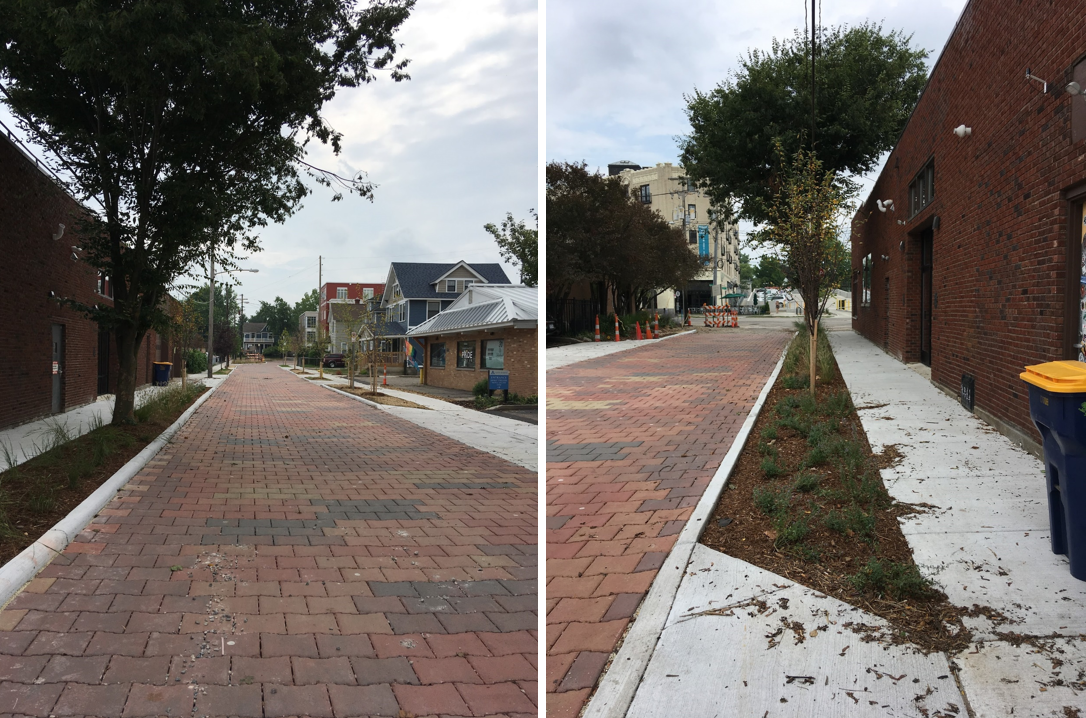