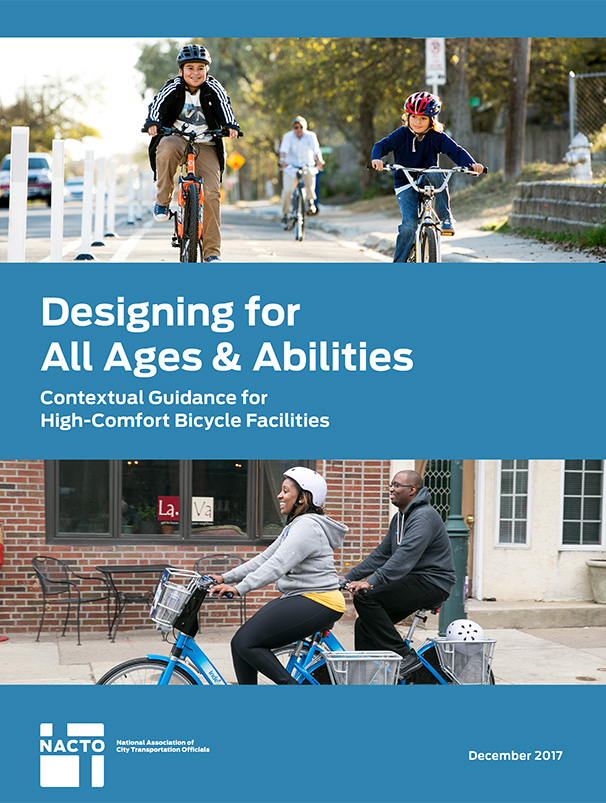 The National Association of City Transportation Officials (NACTO), an organization that represents 58 major cities in North America, today released guidance to help cities decide what types of bike infrastructure will best achieve their goals to build bike networks that are safe and comfortable for riders of all ages and abilities. The new guidance, Designing for All Ages and Abilities, builds upon the organization’s groundbreaking Urban Bikeway Design Guide, an internationally renowned technical guide that has helped cities to dramatically increase the number and quality of urban bike facilities in the United States and Canada over the past decade.

By focusing on two key safety factors—vehicle speeds and traffic volume—in addition to design factors like street width, Designing for All Ages and Abilities gives cities the tools they need to assess any street and decide which treatments will improve safety and support increases in bicycling. The guidance illustrates how on higher-volume streets with vehicle speeds above 20 mph, conventional infrastructure, such as painted lanes, can be insufficient, while on lower-speed streets where other traffic calming measures have been introduced, such treatments may be an adequate solution.

“Since the NACTO Urban Bikeway Design Guide launched in 2011, cities have built 307 miles of protected bike lanes—a dramatic 400% increase in safe and comfortable biking facilities that has been more than matched by pent-up demand for bicycling across the country,” said Linda Bailey, NACTO Executive Director. “Designing for All Ages and Abilities gives cities a powerful tool to evaluate their streets and make clear choices about what they can do to build safe, sustainable bike networks that attract riders of all ages and abilities.”

Developed in consultation with NACTO’s network of 58 North American member cities, and building on guidance created in cities like Austin, Cambridge, and Vancouver, BC, Designing for All Ages and Abilities will help cities ensure that all bike facilities provide a safe, low-stress cycling environment that meets the needs of all riders. The guidance also details how appropriate bikeway selection can mitigate factors that discourage most people from bicycling, such as bike lane designs that put riders in close proximity to frequent buses and large trucks, and high-stress intersections. Designing for All Ages and Abilities is the first national guidance of its type in North America.

“NACTO cities lead the way on forward-thinking mobility,” said Seleta Reynolds, General Manager of the Los Angeles Department of Transportation and NACTO President. “Now we can match the right bikeway to the right street. Riding a bike should be welcoming and fun, no matter what kind of a rider you are.”

“Three-quarters of a million New Yorkers now regularly ride a bike, triple the number from 15 years ago,” said Polly Trottenberg, Commissioner of the New York City Department of Transportation. “We’ve found that the growth in ridership has gone hand-in-hand with a growing bike route network of over 1,100 miles. We continue to meet surging demand, as we have this year installed a record 25 miles of protected bike lanes. As cycling surges, NACTO’s guidance and leadership will help us continue to provide the high-quality and high-comfort bike facilities that New Yorkers increasingly demand all over the five boroughs.”

“Bicycle transportation is proven to reduce pollution, improve the health of our communities and boost local economies,” said Roger Geller, Bicycle Coordinator for the Portland Bureau of Transportation and author of The Four Types of Cyclists. “Until now there has not been clear guidance on how best to make bicycling accessible to the majority of people who, while interested in bicycling, are also concerned for their safety on busy streets. This guide provides jurisdictions a valuable tool in clarifying just what is needed to create safe and comfortable designs not just for ‘cyclists’ but for everyone who wants a better way to get from point A to point B.”

About the National Association of City Transportation Officials (NACTO)

The organization’s mission is to build cities as places for people, with safe, sustainable, accessible, and equitable transportation choices that support a strong economy and vibrant quality of life.

The NACTO Urban Bikeway Design Guide is North America’s most comprehensive resource for creating safer, more attractive, and livable streets for everyone through better-designed bike facilities. Since its first release in 2011, the Guide has been officially endorsed by 64 cities and states, and by the federal government.